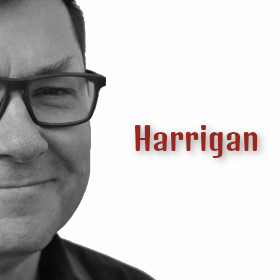 John, better known as Harrigan online since the dawn of time. (Origin of moniker: “Johnny Harrigan” was the name I gave my race car driver in Pit Stop, the old Commodore 64 racing game. It stuck.)

How did you get into RPG’s?

When I first got to high school, I stumbled across a kid who invited me to play. I played about two AD&D sessions of Against the Giants as Fonkin Hoddypeak, and was completely awestruck by the experience despite the GM being rather… adversarial. Discovering RPGs was a huge event in my life.

When you did start gaming, what 2-3 games did you cut your teeth on/what were the first games you played?

First edition AD&D was my jam for many years — probably five. I tried to get the group to play other things — West End Games’ Star Wars, Marvel Super Heroes, GDW’s Judge Dredd, James Bond — but the crew wouldn’t budge from D&D. In later years I burned my TSR bridges and went full-bore into GURPS and Champions, which led to a bunch of other games, many of them small press or indie. The OSR brought me back to the D&D fold. I have made peace with the d20. But I’ll also note that I have not played an elf or half-elf since those first two sessions in 10th grade.

So that kid up there in the first paragraph who showed me the game? We just weren’t on the same wavelength, and I never played with him again. That Christmas, about a month after I first played, my mom bought me the Dungeon Master’s Guide, the Player’s Handbook, and the Monster Manual. I devoured them, taught myself how to dungeon master in a complete vacuum, gathered two friends and never looked back. In those days and for most of my life I have been the forever GM, but these days I have a nice balance of about 50/50 for playing and running.

What are you playing now, how often and what are your top 5 games you’d like to play in 2021?

I play in and run a bunch of different games these days, with a regular group who all take turns GMing, with BSers, and with a bunch of folks I play play-by-post RPGs with. Current games include Delta Green, Forbidden Lands, Vaesen, Shadow of the Demon Lord, Mothership, The Black Hack, etc. Games I’m hoping to play in 2021: White Lies, Symbaroum, Mork Borg, Mausritter, Twilight 2000, Operation White Box.

What do you like the most about tabletop RPG’s?

What do you like most about the gaming and bs community?

The fact that the community is such a big part of the show, not just the forums and the Discord and such. Brett and Sean’s willingness to devote a big chunk of the show to their listeners’ questions and feedback makes the podcast unique in the industry, and it’s better for it. The community is also filled with smart, creative people who know a lot about games, who know how to disagree and debate reasonably,and have incredible insights around what this hobby has become, and what it means to many of us..

I was born and bred in Halifax, Nova Scotia, Canada, but now reside just north of Denver, Colorado with my better half, two teenagers, and dogs Trudy (Chocolate Lab) and Alex (Boxer-Mastiff mix). We love to travel, bike and hike, eat delicious food and generally enjoy life. Beer is good, especially hazy IPAs, and I particularly like bad monster movies and BBQs with friends.